The sterilisation of surgical instruments now plays a central role when it comes to quality assurance in hospitals.

The treatment process is subject to the requirements of the standard DIN EN 285:2016 for steam sterilisation, among others. The steam or water used must not exceed the specified limit values, otherwise deposits and corrosion can occur on the metal surfaces of the instruments. Demineralised water is therefore generally used for the sterilisation process.
This process water (demineralised water) is produced in a water treatment system in the hospital. 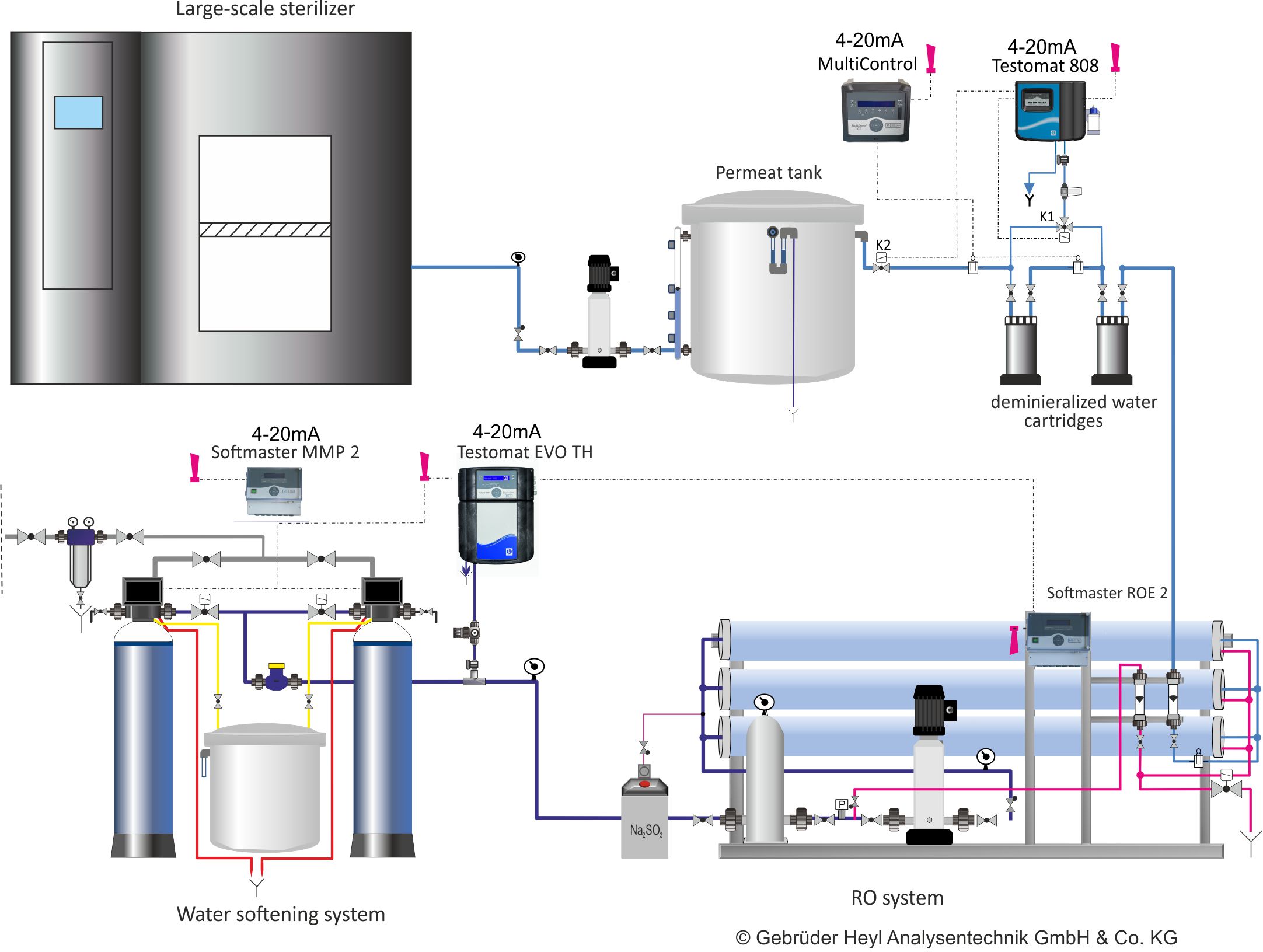 Schematic representation of water treatment for the central sterilisation

Practical test with the Testomat® 808 SiO2 in hospitals

To meet the need of hospitals for a simple, reliable silicate measuring device, Gebr. Heyl Analysentechnik has developed the Testomat® 808 SiO2. This limit value measuring device can determine silicates in the measurement range from 0.3 to 1.2 ppm and thus corresponds to the specifications of the DIN standard EN 285:2016 for a silicate monitoring device.
The design development was followed by a practical test over several months in two Hamburg hospitals.

The devices passed this successfully. 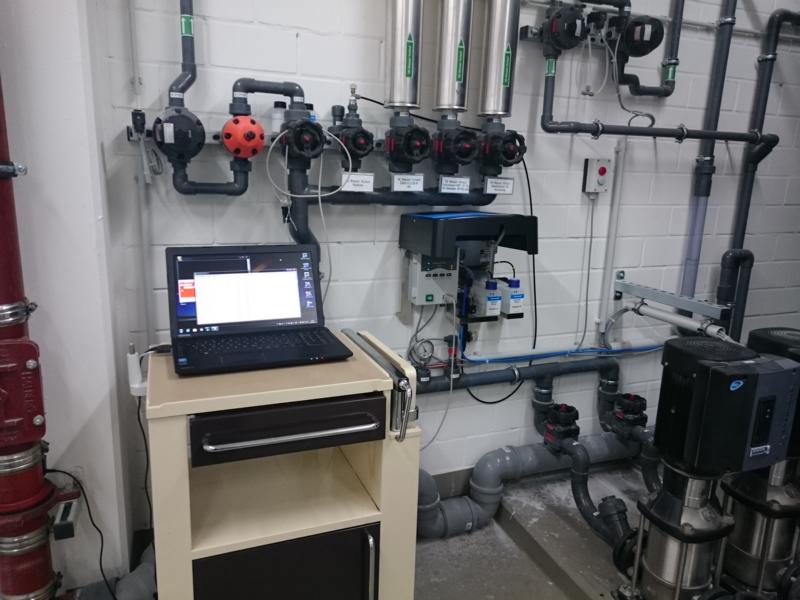 If the current is set too low here, however, silicates will break through. Also, if too many hardeners break through the osmosis system, they will become deposited on the membranes in the EDI system and disrupt the ion exchange. The power consumption rises. With a Testomat® 808 SiO2 downstream of the EDI system, a silicate breakthrough is registered immediately and the system can be inspected.

There were no silicate breakthroughs in our practical test. 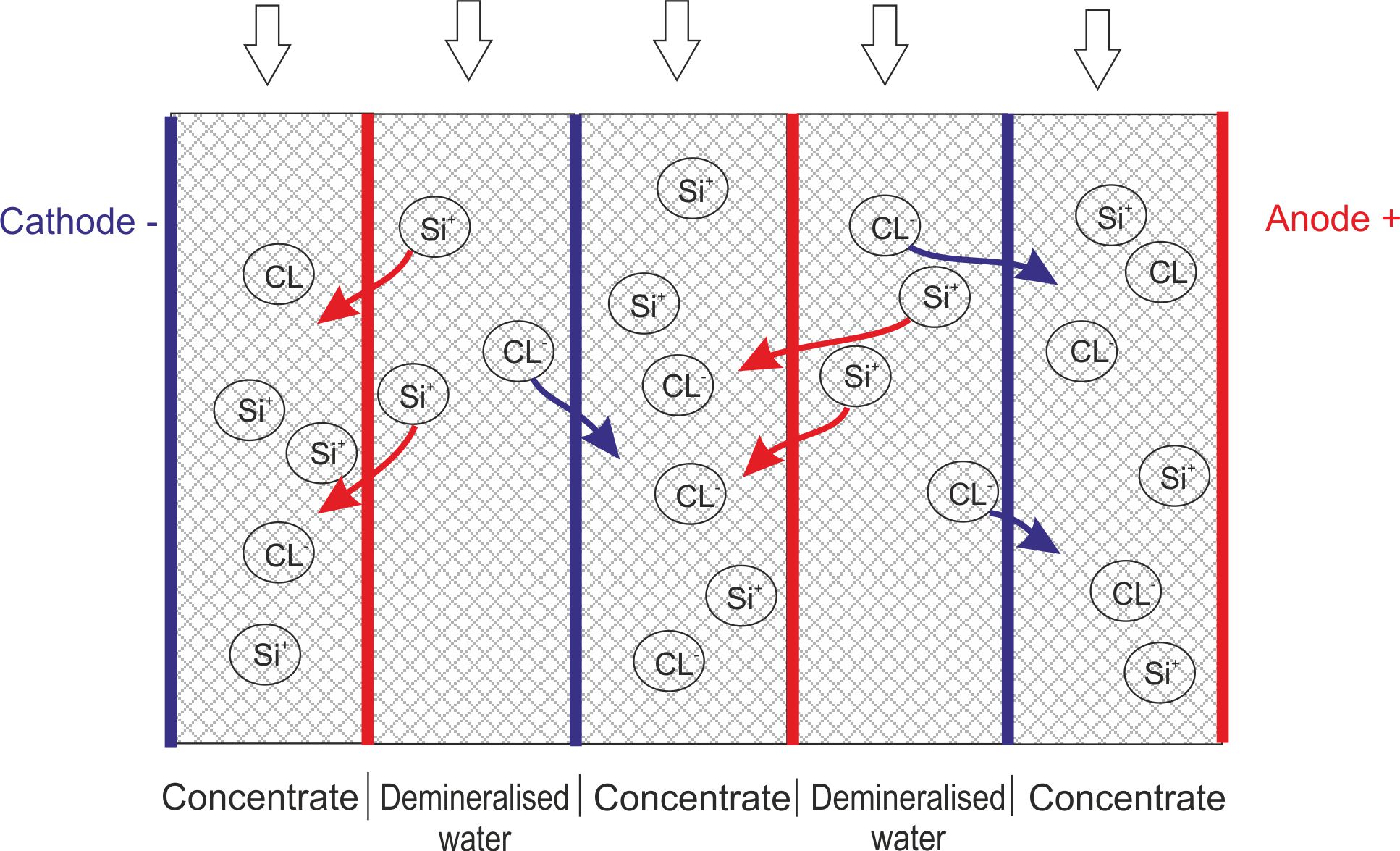 Schematic representation of the ion flow in an EDI system

The second hospital had conventional water treatment with a dual softening system, a reverse osmosis system and two full demineralisation cartridges (referred to below as filters 1 and 2), as shown in the diagram above.

Excessive values of silicate downstream of filter 1 were repeatedly measured here, as the filter capacity was exhausted. In this case, the Testomat® 808 SiO2 automatically switches over to filter 2 (police filter) and signals the breakthrough. This was output via the RS232 interface. A notification via the internal current loop with a fixed value of 8 mA would also have been possible.
After the exhausted filter was replaced, the system operated smoothly again with the first filter until the next exhaustion.

The second filter never became exhausted, as the personnel were always informed in good time via limit value indication, with the result that the Testomat® 808 SiO2 did not have to trigger an alarm and stop the supply of process water.

Analysis values at various points in the water treatment.

A conspicuous feature were the repeated breakthroughs by silicate at filter 1, which quickly became exhausted, although the conductivity was unaffected downstream of the osmosis system. These breakthroughs can be explained by the fact that larger anions from the osmosis system become deposited on the resin in the filter and suppress the smaller silicate ions which are already bound there. These silicate ions are released and flushed out with the demineralised water.

Schematic diagram of the silicate ion suppression by larger ions

This analysis method ensures at all times that the limit values of 1 ppm silicate can be complied with and no impermissible silicate values occur in the central sterilisation.